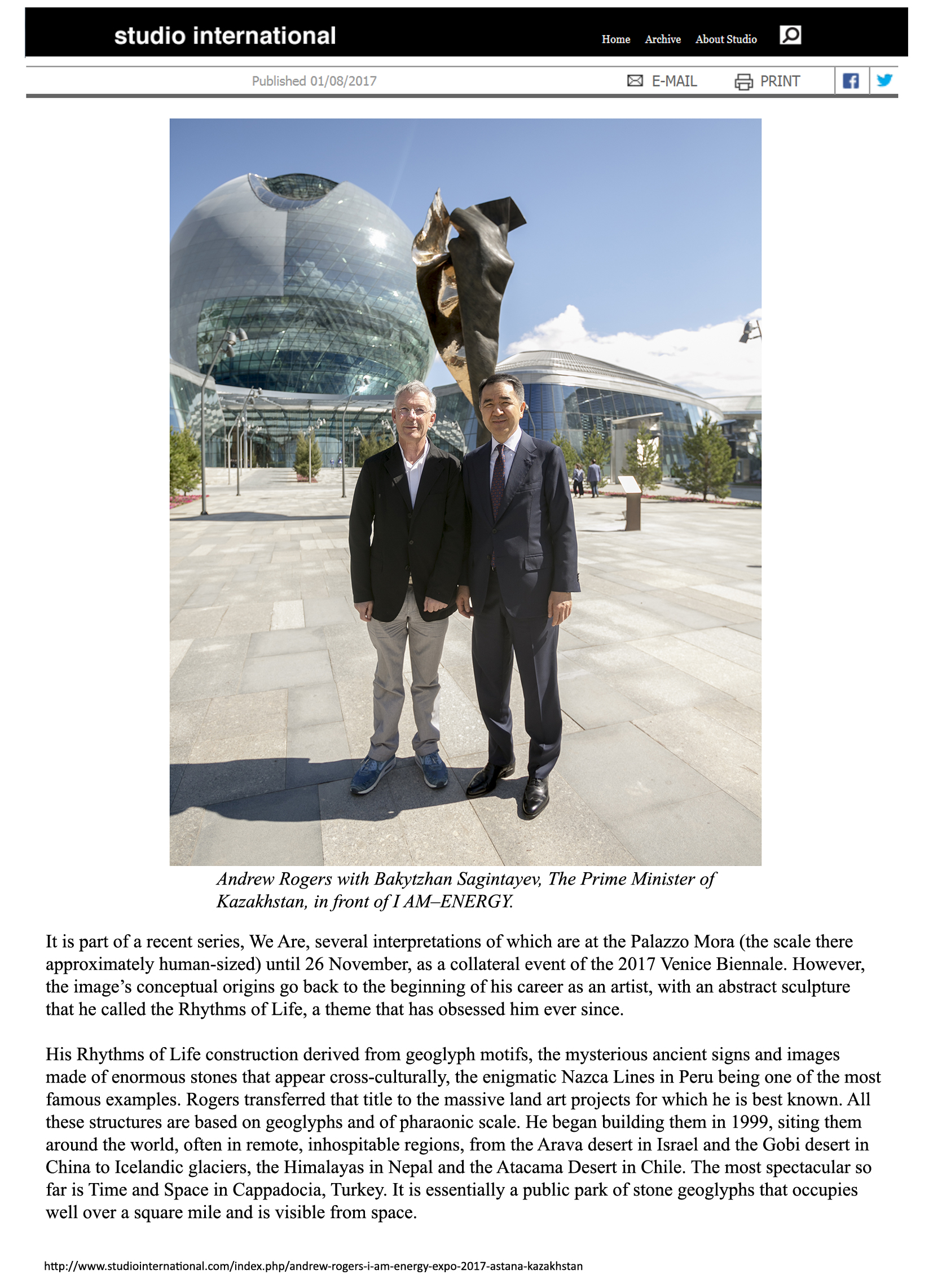 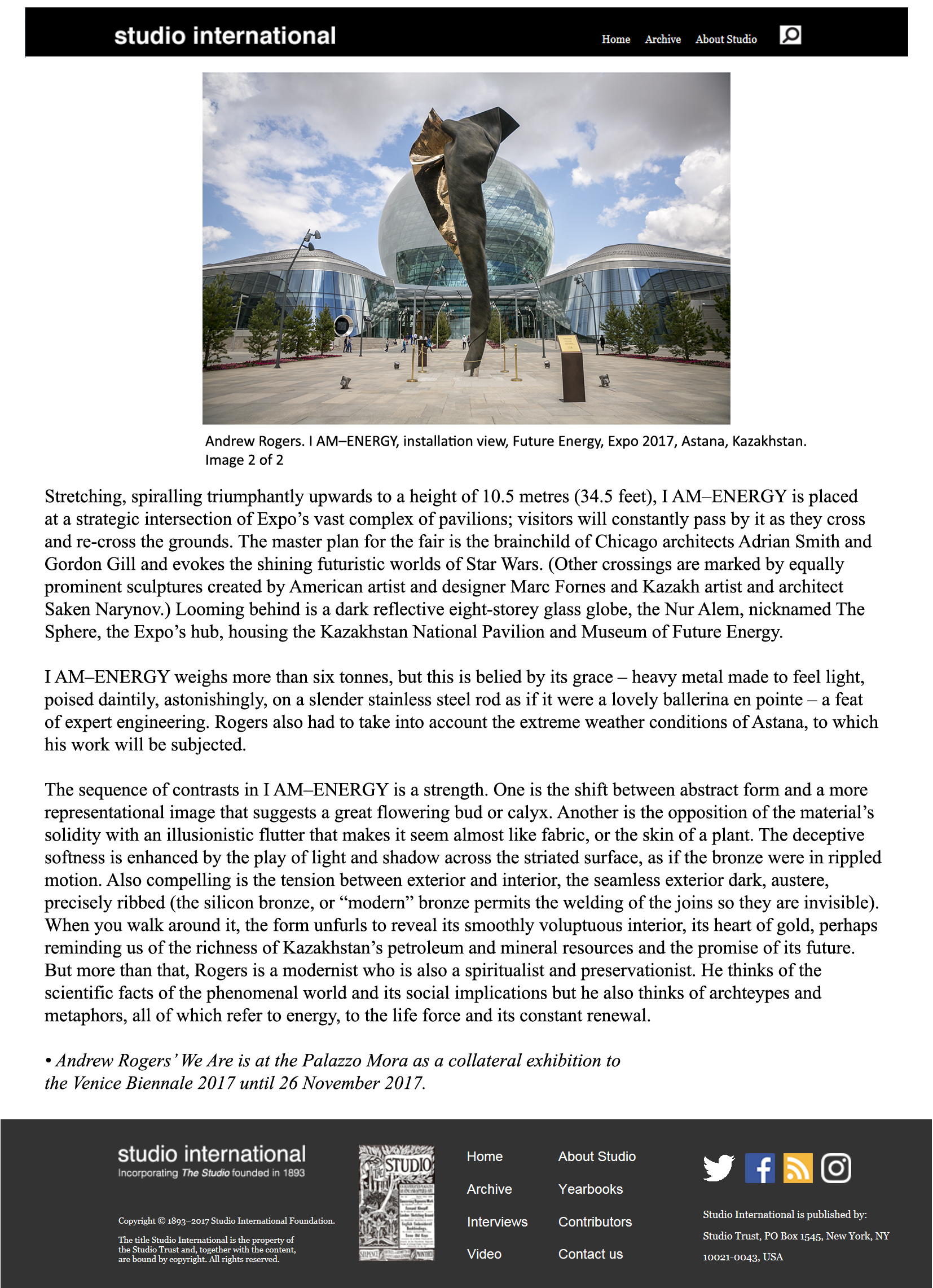 Andrew Rogers: I Am – Energy

Among Expo 2017’s vast complex of pavilions stands Andrew Rogers’
I AM–ENERGY. A sculptural feat of engineering, it spirals triumphantly upwards
to more than 10 metres, confronting visitors like a graceful ballerina en pointe.

I AM–ENERGY is one of Australian artist Andrew Rogers’ most recent sculptures, commissioned for Expo 2017, the theme of which is Future Energy. Held in Astana, Kazakhstan’s capital since 1997 – six years after it declared itself a (nominal) republic – this is the first such fair to take place in a post-Soviet country, boasting more than 150 participating nations. A permanent installation, it is also Rogers’ most monumental cast bronze work to date and one of the most daringly balanced, the bulk of its weight sent skyward. It offers the thrill of upending the expected distribution of mass, challenging gravity as well as treating the unyielding metal in ways that make it more visually agile, fluid, its state less certain, underscoring a narrative about transformations.

It is part of a recent series, We Are, several interpretations of which are at the Palazzo Mora (the scale there approximately human-sized) until 26 November, as a collateral event of the 2017 Venice Biennale. However, the image’s conceptual origins go back to the beginning of his career as an artist, with an abstract sculpture that he called the Rhythms of Life, a theme that has obsessed him ever since.
His Rhythms of Life construction derived from geoglyph motifs, the mysterious ancient signs and images made of enormous stones that appear cross-culturally, the enigmatic Nazca Lines in Peru being one of the most famous examples. Rogers transferred that title to the massive land art projects for which he is best known. All these structures are based on geoglyphs and of pharaonic scale. He began building them in 1999, siting them around the world, often in remote, inhospitable regions, from the Arava desert in Israel and the Gobi desert in China to Icelandic glaciers, the Himalayas in Nepal and the Atacama Desert in Chile. The most spectacular so far is Time and Space in Cappadocia, Turkey. It is essentially a public park of stone geoglyphs that occupies well over a square mile and is visible from space.
Stretching, spiralling triumphantly upwards to a height of 10.5 metres (34.5 feet), I AM–ENERGY is placed at a strategic intersection of Expo’s vast complex of pavilions; visitors will constantly pass by it as they cross and re-cross the grounds. The master plan for the fair is the brainchild of Chicago architects Adrian Smith and Gordon Gill and evokes the shining futuristic worlds of Star Wars. (Other crossings are marked by equally prominent sculptures created by American artist and designer Marc Fornes and Kazakh artist and architect Saken Narynov.) Looming behind is a dark reflective eight-storey glass globe, the Nur Alem, nicknamed The Sphere, the Expo’s hub, housing the Kazakhstan National Pavilion and Museum of Future Energy.

I AM–ENERGY weighs more than six tonnes, but this is belied by its grace – heavy metal made to feel light, poised daintily, astonishingly, on a slender stainless steel rod as if it were a lovely ballerina en pointe – a feat of expert engineering. Rogers also had to take into account the extreme weather conditions of Astana, to which his work will be subjected.

The sequence of contrasts in I AM–ENERGY is a strength. One is the shift between abstract form and a more representational image that suggests a great flowering bud or calyx. Another is the opposition of the material’s solidity with an illusionistic flutter that makes it seem almost like fabric, or the skin of a plant. The deceptive softness is enhanced by the play of light and shadow across the striated surface, as if the bronze were in rippled motion. Also compelling is the tension between exterior and interior, the seamless exterior dark, austere, precisely ribbed (the silicon bronze, or “modern” bronze permits the welding of the joins so they are invisible). When you walk around it, the form unfurls to reveal its smoothly voluptuous interior, its heart of gold, perhaps reminding us of the richness of Kazakhstan’s petroleum and mineral resources and the promise of its future. But more than that, Rogers is a modernist who is also a spiritualist and preservationist. He thinks of the scientific facts of the phenomenal world and its social implications but he also thinks of archteypes and metaphors, all of which refer to energy, to the life force and its constant renewal.
• Andrew Rogers’ We Are is at the Palazzo Mora as a collateral exhibition to
the Venice Biennale 2017 until 26 November 2017.